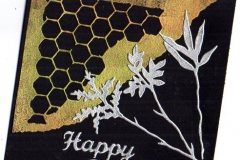 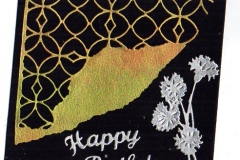 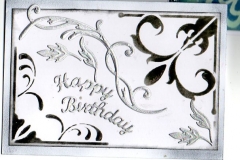 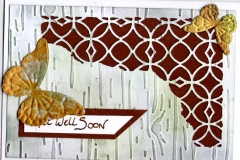 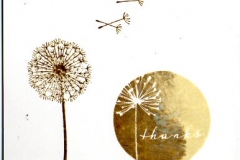 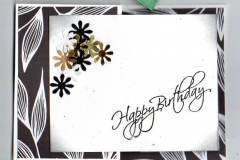 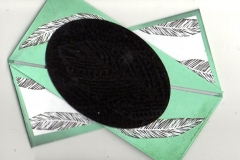 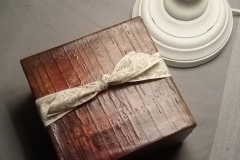 I didn’t sell many Valentine’s Day cards – romance may be a thing of the past OR my stuff isn’t hitting the buttons.

Before you go on – I’m still trying to import this month’s folder of pictures – no luck yet – I’ll keep trying!

I’ve been playing with some French dies: they are very elegant and as I make my own metallic card-stock out of cereal packets and tea-bag boxes they are a cheap alternative for quite a special look. There is one in here that I’m particularly fond of – bet you can guess which one.

Seth Apter has a grungy style that is fun to try to emulate. The picture of  my attempt is a very poor thing but the multi-textured reality is a joy. I don’t think this example will be going outside the family. And I had one of those glorious happenstances this week. I clumsily dropped an elastic band on some wet gesso. The effect was SMASHING – so I dropped it a few more times. I’m sure you’ll be able to spot it.

I’ve just bought Steven Pinker’s book “The Sense of Style” so my prose style could be improving soon . . . .  Well, I can always hope!